Welcome to the Department of Public Policy’s (DPP) second edition of Teaching Tuesday! Throughout this semester we will be featuring faculty on Tuesdays and teaching you a bit about their lives outside of the classroom. Each faculty featured will be asked a few questions and we will post their responses without a filter. We look forward to sharing our faculty with you and hope you enjoy learning some fun facts that you may not have previously known. Our latest feature is Professor Thomas Craemer!

Question 1: Why did you decide to become a professor?

It was not so much a decision as an evolution. When I was young, I did not make plans for the future because at the time (in the 1980s) many of my friends passed away from AIDS and I had no reason to believe that I would survive them for long. Then I was torn between embarking on a career as a classical singer and getting a degree in political science. The latter opportunity opened up first when I was accepted into grad school in Stony Brook, New York. I was electrified to learn about how to use quantitative research methods in answering interesting political questions. One of the best ways to do that was to become a professor.

Question 2: What are your teaching interests?

I teach in the Graduate Program in Survey Research (GPSR) based on my survey experience. During grad school I worked at the Stony Brook Survey Center. And I teach two classes in the MPA program that are close to my research interest in implicit and explicit racial attitudes and race-related political opinions. One course is Public Policy, Diversity and Inclusion, the other is Race and Public Policy.

Question 3: Why did you decide to come to UConn?

After grad school I applied nationwide but hoped for something not too far from the city I had fallen in love with during the 9/11 crisis – New York! One of my favorite institutions was UConn, but early on in the application process, I learned that I was not selected. Later my adviser told me that another position at UConn had been advertised. 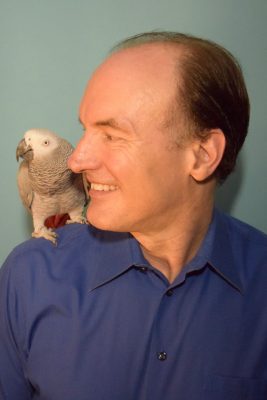 They made me an offer and I was delighted to accept!

Question 4: If you weren’t a professor what would you be instead and why?

First of all, I would have never predicted I could possibly become a professor because I was not very good in high school and I was terrible in math (now I love statistics)! In my youth, I was active in my native West Germany’s peace movement and in the Central America solidarity movement. I went to harvest coffee in the middle of the civil war in Nicaragua when I was 20. At the time, ‘revolutionary’ would have been a cool profession. Later I was trained as a classical singer, so ‘opera singer’ moved to the top of the list (unfortunately, I recently lost my singing voice to a nasty cold). Today, ‘zoo keeper’ would appeal to me because I have an African Grey parrot named Alex and a charming little ball python named Madame Curie (see pictures) that amuse me to no end. However, professor is still my favorite profession.

Question 5: What is your favorite thing about Hartford?

The UConn Hartford campus, of course!

Question 6: If you could travel to any location right now where would you like to go and why?

I dream of leaving my apartment and walking the streets in front of my condo complex without a mask on. I know, crazy idea!